To share your memory on the wall of William Kent, sign in using one of the following options:

William (Bill) J. Kent, Jr. passed away peacefully in his home at the age of 90 on Sunday, August 30, 2020. His wife and daughter Cindy were with him during his... Read More
WILLIAM J. KENT, JR.

Bill enlisted in the U.S. Navy reserve at age 17 following his graduation from Parker High School on Chicago’s South Side and received an honorable discharge for his service in 1955.

A son of a police officer, Bill led a successful career in electronics and technical instrument repair. He operated his secondary business, Calumet Marine Radio, servicing tug boats and ship lines in Chicago harbors and on the Cal Sag Canal. He was an electronics expert, repairing/installing radars and radiotelephones. Bill’s passion since childhood was repairing and fixing things, both mechanical and electrical. His children always said “they never saw anything their dad couldn’t fix.” In addition to his secondary business, Bill’s primary career in electronics served both the City of Chicago and the West Suburban Metropolitan Sanitary District as an instrument technician and manager. He retired in 1988 and never slowed down. He was always working on projects and fixing things as he established residence in Florida for the winter, while continuing residing in Wisconsin on Lake Beulah during the summer.

Bill’s lifetime love has been Lake Beulah. After spending his youthful summer days boating on Lake Michigan in Chicago and on Lake Geneva in Wisconsin, Bill and Joan found the home of their dreams in 1967, where they enjoyed their summers through present times. He became highly involved in the Lake Beulah Yacht Club with his children and served as Commodore in 1980. He loved to participate in C and MC Scow sailing races. He passed that sailing legacy down to his children and grandchildren. Bill also was instrumental in the club’s expansion and clubhouse construction projects, as well as the building of its original seawall. His giving heart was always present at the club and he received awards and appreciation for his service to the club.

Most of all, Bill enjoyed time with his family. He found joy being with, and watching his children and grandchildren grow. He was ever present enjoying their activities in competitive sports and scholastic events. He loved seeing them happy and followed along in their lifelong achievements. He worked with them on projects around the house and through his guidance taught them about life and hard work. He was well respected by his peers and friends and passed those qualities onto those he loved. His dry jokes and keen sense of humor were always welcomed at social engagements.

Bill was a loving and devoted husband of sixty-three years and an outstanding father, grandfather and guide in life. Special thanks to caregivers Tracie, Tee, Yoyee and Alma and the Hearts to Home and Seasons Hospice care teams who dedicated their time and love to him. His life has ended but his strength, values, warmth, caring, love and memories will last forever.

May peace be with you now and always,

The family will have a private memorial service.
Read Less

Receive notifications about information and event scheduling for William

We encourage you to share your most beloved memories of William here, so that the family and other loved ones can always see it. You can upload cherished photographs, or share your favorite stories, and can even comment on those shared by others.

Posted Oct 01, 2020 at 09:36am
Please accept our most heartfelt sympathies for your lossour thoughts are with you and your family during this difficult time.

3 trees were planted in the memory of William Kent 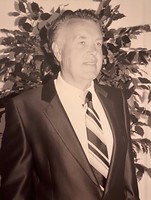