To share your memory on the wall of Timothy McBride, sign in using one of the following options:

Provide comfort for the family of Timothy McBride with a meaningful gesture of sympathy.

Son of Ira and Annette McBride, he was born on October 3, 1952 and was the youngest brother of Michael, Kenneth, Kathleen, Frederick, Karen, Maureen, Christine and Collee... Read More
Timothy P. McBride found peace with the Lord on September 7, 2019.

Son of Ira and Annette McBride, he was born on October 3, 1952 and was the youngest brother of Michael, Kenneth, Kathleen, Frederick, Karen, Maureen, Christine and Colleen.

Loving husband of Kathleen McBride for 45 years, and father of Patrick, Corey, and Chris (Jenny). Grandfather of Ida, Norah, and Artie.

Tim graduated from Greendale High School in 1970 and entered the US Air Force the following spring.  He was trained as a management analyst. He served two overseas tours of Vietnam and was recognized as NCO of the Quarter.

Tim and Kathy met at the former Eddie’s Club “B” (now Sandra’s on the Park) in Hales Corners when they were both 16.  They married 4 years later.

Tim was employed by Miller Brewing Company for 37 years.

Tim was eccentric, had crazy curly hair, wore baseball uniform shirts from teams he played on until they were threadbare; The Master Batters, The Fireballs, Shabs, Uraz…  He was quick to smile, had a big middle finger for anyone who wasn’t, and had an even bigger heart. He was unapologetic about fighting for what was right and being his own man.

As his children went to school, Tim was a “room-father” among “room-mothers,” always willing to help out with field trips or school events and inevitably being put in charge of the most rambunctious kids.

Tim’s impact on youth baseball in Hales Corners cannot be overstated.  He was the Little League President, and eventually helped plan, oversee, and brought the vision of Schoetz Park to reality.  Early on he spent countless hours of volunteer time cutting grass and dragging the infields. As the park got up and running he returned to umpiring and coaching.

Though he’d be willing to coach anything his kids played, baseball managing was his passion, and young teams responded to the goofy guy with big hair whose ultimate concern was that they play hard and have fun!

In lieu of flowers, memorials may be made to the charity of your choice.
Read Less

We encourage you to share your most beloved memories of Timothy here, so that the family and other loved ones can always see it. You can upload cherished photographs, or share your favorite stories, and can even comment on those shared by others.

With Love, The Gin, Stephens, Schrieber & Wilkes F sent flowers to the family of Timothy P. McBride.
Show you care by sending flowers

My friend Tim contributed in so many ways to his family and community. He certainly got more out of life than most. A truly unique individual. I was blessed to have him in my life.
-Rich
Comment Share
Share via: 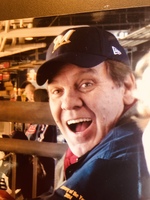