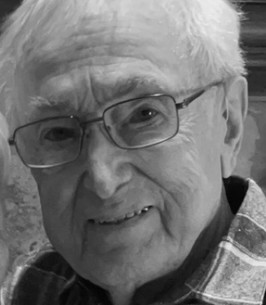 Thomas P. Schwalbach, age 89, Passed away peacefully at home, surrounded by his family on Wednesday June 22, 2022.

Preceded in death by his parents, William and Agnes, his brothers Jack, and Jim, sister Betty, and grandson Lucas Schwalbach. A Celebration of Life will be held at St. Mary's Catholic Faith Community church, in Hales Corners, WI. on Thursday June 30. Visitation from 10:00am to 11:45 am, with Mass starting at 12:00 pm. In lieu of flowers please consider donations to St. Mary’s, St Vincent de Paul Society, or your favorite charity in Tom’s name.

Tom led a very full life filled with family, friends, music, art, service, fun, and enormous love for his wife Mary. Tom was born in the house he grew up in, in the city of West Allis. This is where he learned his greatest qualities; responsibility, service, love of family, and how to have fun. He was drafted into the US Army and served during the Korean War. He was very proud of this service and capped it off with an honor flight with his youngest son in 2016.

He sold insurance and investment products for 30 years and truly loved his interaction with his customers and the fact he was helping them plan and prepare for a better future. He often spoke of many of his customers as true friends. He and my mom had a group of lifelong friends who were part of a card club, who met regularly with more laughter than should be allowed. He and Mary were part of a travel group and they travelled throughout Europe as well as a long Alaskan vacation. One of his granddaughter's asked him "what is the one place he would go back to?" "Greece, I loved Greece".

He had a life filled with music, whether it was growing up with big band music, his formative years with Frank Sinatra, his Saturday night "Date night" with Mary at home listening to Barbara Streisand, Neil Diamond, or Linda Ronstadt. His joy for music was intense. One of his final statements in life was "life is a musical panorama" as his favorites played nearby.

Throughout life he also believed in service. Whether it be coaching his kids teams, delivering and serving meals for the St. Ben's meal program, providing marriage preparation classes with Mary through their church and the Milwaukee Archdiocese, as well as his long connection with St. Vincent DePaul where he started as a recipient early in life and became a volunteer and provider to them. He even was a volunteer at the Performing Arts Center, until he was asked not to return because he spent too much time listening and watching the shows.

Later in life he picked up painting. He had never really done it, so he took classes determined to make good art he was proud of. He accomplished that goal and was an artist. He painted a picture of one of his sons houses which hangs inside that house today. He was surrounded by his art in his last days as he proudly displayed it in their home. He even inspired one of his nieces to start painting later in life and she has become an amazing artist.

He was a man who loved life, loved to have fun. He was responsible to his mother and her family when things got rough, and responsible to provide love and opportunity for his wife and kids. Lastly. His love for his wife was unwavering and they were truly best friends and lovers. They both enjoyed each other’s company and the company of others. If there was a party, they were the last one's looking for an exit. It became a challenge later in life as some parties would really take the wind from his sails for a few days or more. He would talk about restraint and leaving the next one early but when the time came to leave early, he would stick it out longer.

He was a pretty amazing man I must say!