To share your memory on the wall of Shirley Sorensen, sign in using one of the following options:

Print
Shirley Geraldine Sorensen passed away peacefully from complications due to COVID-19 on November 18, 2020, at St. Luke's hospital in Milwaukee. She is now with her Lord and her loving husband of 72 years.

Shirley was born on the south ... Read More
Shirley Geraldine Sorensen passed away peacefully from complications due to COVID-19 on November 18, 2020, at St. Luke's hospital in Milwaukee. She is now with her Lord and her loving husband of 72 years.

Shirley was born on the south side of Milwaukee on April 3, 1926, to Cecilia (Curley) and John Forster. Growing up during the depression she was raised not only by her mother, but also by her grandparents and her aunt above a boarding house/tavern they owned. Shirley had a large and close-knit family, with many of them also owning taverns throughout Milwaukee. During Shirley's senior year in 1942, she met her future husband, Elvin Sorensen, at a South Division High School dance. They started dating just prior to him leaving for the Marines. During WWII, Shirley attended State Teachers College (UWM) and worked at Allen Bradley. Upon Elvin's return, they were married and started their family on Maryland Avenue near the UWM campus. Shirley loved the neighborhood and frequently reminisced about its beauty, schools, and their wonderful neighbors. Shirley and Elvin had seven children and Shirley settled in to being a loving wife and devoted mother to her children. She enjoyed taking an active part in her children's school activities. Her genuine warmth, radiance, and loving devotion to her entire family leaves a legacy for everyone to cherish.
When Elvin decided to go into the tavern business, Shirley became the CEO behind the scenes - handling insurance, employees, inventory, taxes, and payroll. The Gas-Lite East on Jackson Street grew into a multi-location family business with the help of their adult children. After their sons took over the tavern businesses, the family moved to Elm Grove. Wanting to stay busy, she then enjoyed working at Usinger's on old Third Street, helping out during their busy holiday season.

Shirley especially enjoyed spending time with her family at Lake Wisconsin, getting together with her many lifelong friends they called "the club", visiting family in Connecticut, Florida, and California, and going on cruises. She was always game for any adventure and loved having fun.

A memorial service will be held at a later time due to the Pandemic. Any donations may be made to St Jude.

Receive notifications about information and event scheduling for Shirley

We encourage you to share your most beloved memories of Shirley here, so that the family and other loved ones can always see it. You can upload cherished photographs, or share your favorite stories, and can even comment on those shared by others.

Plant a Tree in Memory of Shirley
Plant a tree 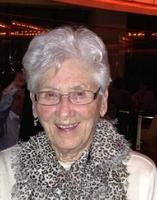