To share your memory on the wall of Richard Alva Jr., sign in using one of the following options:

Provide comfort for the family by sending flowers or planting a tree in memory of Richard Alva Jr.

Provide comfort for the family by sending flowers or planting a tree in memory of Richard Alva Jr.

God blessed us with his presence on 03/31/1986. Ricky was born and raised in Milwaukee, WI. He was loved unconditionally by his father Richard Alva, Sr (Rosa) & Mother Priscilla Placensia (Paul). Ricky was known for being a hard working man and a member of the Local 113 Laborers Union.

He was survived by many friends & family members. He had six beautiful children Alexis, Alyna, Anayl, Josiah, Ricky, Romello and a baby girl due this June. He will be missed by his girlfriend Malina, sisters Nanette (Roy), Priscilla (Kenny), Odalis, Marcella, Malena, Liliana (Sammy) & Marquise, his brothers Johnny and Gabriel, his grandmother Juanita, Aunts Lisa-Marie (Jesse), Julia, Mary, Carol, Norma, Mable, Marlene and Uncles Eddie, Chris, Mike & Ruben along with many cousins.

If you encountered Ricky you will remember a man with a heart of Gold who showed love to all who encountered him. He enjoyed having fun and singing out loud making karaoke night unforgettable. He will be remembered as the life of the party or the jokester. His smile was contagious and his energy always lifted up the room. We love you Ricky and may your beautiful soul Rest In Peace. Ricky may not physically be with us but his spirit and presence will always be felt.
Read Less

Receive notifications about information and event scheduling for Richard

We encourage you to share your most beloved memories of Richard here, so that the family and other loved ones can always see it. You can upload cherished photographs, or share your favorite stories, and can even comment on those shared by others.

Montalvo Family, Ladi, Jose, Steve and Rick Cervantes, and other have sent flowers to the family of Richard L. "Ricky" Alva Jr.
Show you care by sending flowers

Posted Apr 03, 2021 at 09:19am
Wishing you peace to bring comfort, courage to face the days ahead and loving memories to forever hold in your hearts.

Flowers were purchased and a memorial tree planted for the family of Richard Alva Jr.. Send Flowers

Posted Apr 02, 2021 at 11:28am
RIH CUZ LITTLE RICK YOUR GONNA BE VERY MUCH MISSED EXSPECIALLY THAT SMILE WE LOVE YOU LOVE YOUR CERVANTES FAMILY

Posted Mar 31, 2021 at 10:53pm
May God bring you comfort and healing. Sending our love and prayers to the Alva family. 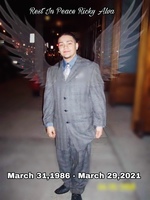