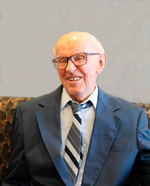 Ray, the eldest of 5 children, grew up in a 2-bedroom bungalow on Oklahoma Avenue on Milwaukee’s south side. As a young child Ray spoke only Polish. He learned to speak English while attending St. Helen’s Catholic Elementary School. In 1937, the family moved to Hales Corners and purchased a “farm” which included a house, barn and twelve acres of land. Ray graduated from Marquette High School in 1938 where he was a member of the Soldality, Latin, Honors, and Junior Chorus clubs. He attended Marquette University and graduated in 1943 with a degree in Mechanical Engineering.

After graduating from Marquette, Ray worked for Boeing as an engineer, assigned to work on the B-29 Superfortress. After the war and following in his entrepreneurial father’s footsteps, Ray and a partner created Colt Manufacturing Company, where Ray served as vice-president. As a pioneer in the use of hydraulic drives, Ray was awarded a patent for his drive and power transmission arrangement in 1964. After selling the business to Case in the mid-1960’s, Ray went to work for the Heil Company where he worked until he retired.

Ray met his future wife, Gloria, on a blind date set up by his uncle. Ray and Gloria married on May 29, 1948 at our Lady of Guadalupe Church. The family lived in Milwaukee and moved to Hales Corners in 1952. Ray, along with his brothers and uncles, built their home on Grange Avenue. It was in this home where the couple raised their six children, hosted many dinner parties, and celebrated many special events with family and friends.

Ray was often referred to as a quiet man of few words who was always listening to what was being said. A high school friend wrote in Ray’s yearbook, “Quiet, but words of wisdom were only spoken by you.”

Ray had many life-long interests. He was an avid golfer and even built a three-hole golf course on his parent’s property. When he wasn’t golfing, you could find him in his expansive garden or looking at seed catalogs in the off-season. In his later years his role as master gardener turned to supervising his daughters as they carried out his gardening tasks. Ray was an amazing artist who used clay, wood, and marble to take what he envisioned and bring it to fruition. Eventually he discovered the art of cloisonné and designed many sculptures, decorative plates, and pieces of jewelry using this technique. These works of art are still cherished by many, as he frequently gave pieces away when someone admired them.

Even though Ray was known as a quiet man, he had a group of close friends who met on a weekly basis. The ROMEO’s (Retired Old Men Eating Out ) as they are known, would meet for lunch to discuss the world’s current events and problems, propose solutions, and share their lives and memories. Anyone who was invited to attend a lunch with the ROMEO’s was treated as a guest, and their meal would be paid for by the whole group.
During his 101 years, Ray touched the lives and hearts of many. His smile, gentleness, and appreciation for life will serve as an example for others for generations to come
Special thanks to his wonderful caregivers: Barbara Kalicki, Kate Murawska, Martin Murawska, and Piotr Wawreniuk.
Memorial Services will be held at Hartson Funeral Home with visitation on Saturday, May 21, 2022 from 9:30 am to 11:30 am. Celebration of Life Service at 11:30 am.
In lieu of flowers, memorial donations may be directed to:
Victory Garden Initiative https://victorygardeninitiative.org/donate/
Eras Senior Network https://eras.org/donate/
The family would like to gather after the service to share memories and celebrate Ray's life. Details will be provided at the end of the service.