To share your memory on the wall of Philip Nickerson, sign in using one of the following options:

Phil worked with his parents at the local newspaper, Tri Town News. He sold new home construction for Kilps Realty and worked more than 30 years assisting his clients with insurance needs for Mutual Service Insurance (MSI) later known as Country Financial. Phil was very active in his community serving on the Franklin School Board, various commissions for the city of Franklin, The Franklin Noon Lions, and St. Paul's Lutheran Church in Tess Corners.

Private services will be held due to Covid 19 restrictions with a celebration of life later in the year. Memorial contributions may be made to St. Paul's Lutheran Church - Tess Corners, Franklin Historical Society or a charity of your choice.
Read Less

Receive notifications about information and event scheduling for Philip

We encourage you to share your most beloved memories of Philip here, so that the family and other loved ones can always see it. You can upload cherished photographs, or share your favorite stories, and can even comment on those shared by others.

So very sorry to read of your loss. My most sincere condolences to you and your family.

Posted Apr 04, 2021 at 04:03pm
All of the people who worked with and knew Phil for so many years at MSI/Country Insurance will miss him dearly and always remember him in the future. Please accept our deepest sympathy. Posted Apr 03, 2021 at 02:20pm
I have only known Phil for a few years through the St. Paul Lutheran Church Walking Group. I enjoyed our varied conversations, his knowledge and interest in history, his clever sense of humor, his love of travel and family, his spirit and spirituality, and learning about his wide career successes.
I will always remember his smile and grit and personality,and will miss him very much.
Terry Lampiris
Comment Share
Share via:
R

Posted Apr 02, 2021 at 09:36am
I will always remember Phil as one of the kindest and funniest person I have known. He could make you laugh every time he came to visit. I especially remember the time he was asked by my mom to empty the trunk of her car and he brought in the spare tire. That spare tire story even made it all the way to my wedding when I received a little lawn mower tire from him as a wedding gift. Even though we didn't get to see him very much I will always remember him and miss him. Rose
Comment Share
Share via:
YF

Your Waste Management Family purchased the Blooming Garden Basket for the family of Philip Nickerson. 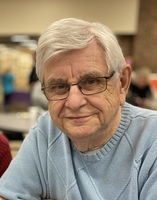