To share your memory on the wall of Paul Knaapen, sign in using one of the following options:

Print
Paul Anthony Knaapen passed away on Monday September 14th, 2020, following a courageous three-year battle with leukemia. He passed peacefully at home with Peg, his wife of 34 years, by his side. He was 62 years old.

Paul was born on Sept... Read More
Paul Anthony Knaapen passed away on Monday September 14th, 2020, following a courageous three-year battle with leukemia. He passed peacefully at home with Peg, his wife of 34 years, by his side. He was 62 years old.

Paul was born on September 25, 1957 in Sturgeon Bay, Wisconsin, to parents Jim and Regina Knaapen, the youngest of seven siblings. He graduated from the University of Wisconsin Whitewater where he studied accounting, began lifelong friendships, and found his wife Peggy. Paul spent most of his career working at Liturgical Publications Inc (LPi).

Paul and Peg were married in 1986, hosting a backyard luau for their wedding reception. Paul was the most amazing father to his two children, Emily and Katie, who he loved dearly. Paul was a committed father and husband devoting much of his time to musical performances, dance competitions, and “Dad-ventures”.

Paul passionately led LPi as CFO, CEO, and ultimately Chairman of the Board for nearly three decades. His time at LPi was characterized by those same attributes he had in his personal life: honor, intelligence, pragmatism, and realism, all the while living his life with unending positivity. Paul was fortunate to share friendship, leadership, and mentorship with his colleagues at LPi.

If you were fortunate enough to know Paul, you likely heard a story or two about his love of golf. He was happy to share his love of the game with anyone who would listen, bragging about his triumphs and laughing about his blunders. Paul played the game as often as possible, occasionally playing at least one round every month of the year despite the harsh Midwest winters. A few of Paul’s most proud golf related accomplishments include playing on the golf team at UW Whitewater, making a hole-in-one and Eagle on back-to-back holes (number 3 and 4) at Edgewood Golf Course, coming in one under par at Washington County Golf Course, and qualifying for the Wisconsin State Golf Association Amateur Match Play Championship in 2018 in spite of his leukemia diagnosis. Paul was always a joy to golf with – he was a great teacher, happy to share his passion for the sport and ultimately just wanted everyone to have a good time.

Paul took great joy in life and in his family, always enthusiastic to get started on a new project whether it was building a deck, constructing a tree fort, or experimenting with an extra credit science project. He took his daughters on countless adventures, even ones that mom might not have approved of. He was as beloved at work as he was at home bringing dedication, hard work, intelligence, and humor to everything he did and everyone he interacted with – he always went above and beyond. His success in life was due to the exceptional way he treated people and his unreserved kindness. His positive spirit and can-do attitude shined throughout his illness. He fought, not only to beat cancer, but also to live life to the fullest. He had a gentle, kind, and good-natured spirit – his friends and family will miss his booming laugh and upbeat sense of humor.

Paul shared with his family that he saw his life in thirds. The first third was devoted to working on himself, the second third devoted to fostering his family, the final third to giving back to the community. Paul was charitable throughout his life and had an interest in working on issues related to safe and affordable housing for all. Please assist us in continuing Paul’s wish to give back to his community by sending memorial donations to either of his favorite charities: Habitat for Humanity or the Hunger Task Force.

Receive notifications about information and event scheduling for Paul

We encourage you to share your most beloved memories of Paul here, so that the family and other loved ones can always see it. You can upload cherished photographs, or share your favorite stories, and can even comment on those shared by others.

Kathi Wilson and The Polack, Bohlmann, Conway and Thompson Families sent flowers to the family of Paul A. Knaapen.
Show you care by sending flowers

Posted Oct 01, 2020 at 09:44am
Please accept our most heartfelt sympathies for your loss. Our prayers are with you and your family in this difficult time

Flowers were purchased for the family of Paul Knaapen. Send Flowers

I am so sorry to hear about the loss of Paul. He was such a wonderful man and will be missed by many. My condolences to you during this difficult time.

Sharing a brief memory of Paul;

I met both Peg and Paul at UW-Whitewater my freshman year at college. Peg was on my floor at Wellers Hall and all the girls hung out together along with a bunch of guys also from the same dormitory. I was very lucky to have met such a wonderful group of friends at UWW. One of the best memories I have of Paul was when he and the guys participated in Trivia contests. They would all cram into one dorm room with a bunch of encyclopedias and trivia books as references and listen to the radio for the next question. As soon as the question was announced they would scramble to get the answer and then call into the radio station hoping they were first and of course had the correct answer. Paul was just having so much fun as his smile permeated the room. He was in his element with the challenge of trivia knowledge, the speed of the game and more importantly the close friends surrounding him. I marveled at how intent he and the guys were at this fun yet serious game they played for hours and hours. Of course, today trivia contests don’t exist, due to the internet, where everything is instantaneous. He was a true friend to many, being so sweet, so kind, with one of the biggest hearts ever. He will be missed greatly.

A donation was made to Habitat for Humanity

Flowers were purchased for the family of Paul Knaapen. Send Flowers

Posted Sep 27, 2020 at 06:40am
Please accept our most heartfelt sympathies for your loss... Our thoughts are with you and your family during this difficult time.

The Polack, Bohlmann, Conway and Thompson Families purchased flowers and planted a memorial tree for the family of Paul Knaapen. Send Flowers 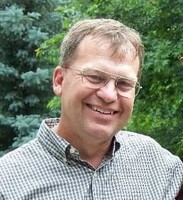