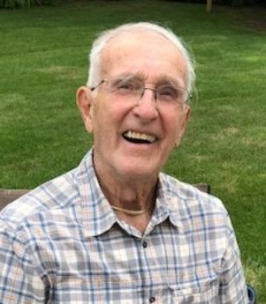 GREENDALE - Bob passed away peacefully on September 14, 2022 at the age of 89 from complications of an automobile accident on August 28, 2022.

Bob and his family were born and raised in Milwaukee. Bob and his bride Jean were married in Denver, CO in 1953. Bob found employment with the Colorado Game & Fish Dept.

He loved the great outdoors and treasured the job in Colorado. His true dream was to be a Structural and Ornamental Ironworker. He received a call that an Ironworker’s Apprenticeship was available back in his hometown of Milwaukee in 1956. Bob and Jean moved back to Milwaukee to start an apprenticeship through the local union, Ironworker’s Local 8. Bob remained a loyal member of Local 8 for 66 years.

Bob worked on a myriad of construction projects that included bridges, buildings and various public structures that we have all used and benefited from. Bob studied and mastered the welding industry and metallurgy sciences throughout his career. He trained and became a Certified Welding Instructor and was well known, and respected in the industry. During his last 19 years as an active Ironworker, Bob was the Apprenticeship Coordinator, running the apprenticeship program. He loved teaching and mentoring hundreds of young apprentices through their path to becoming a Journeyman Ironworker. Bob was both tough and fair with his young aspiring Ironworker Apprentices. He treated all people in an equal manner.

A recently built Ironworker’s Local 8 Apprenticeship Training Center was appropriately named in his honor as the Oliver “Bob” Haase Training Center. This was an earned and deserved dignified honor. Bob remained friends with many he mentored and numerous other people in all the Building Trades. Bob was a loyal union man his entire life and fought hard for all unions in America. He was a Ironworker’s Local 8 member until his final breath.

Bob fought passionately for Civil Rights in the turbulent 1960’s. Bob served on many boards and commissions. He was a founding board member of Jobs with Peace in 1982. He also served as a board member on the Commission on Aging, advocating for rights for seniors. Bob was a tireless advocate for the disadvantaged and the common everyday people. He lived his life in complete honesty and followed the Golden Rule, extending kindness and consideration to all regardless of their circumstances. If there was a good cause for people, he was in.

The family extends gratitude for the care and compassion from Heritage Square Care Facility on Loomis Road in Greendale. The family also extends sincere gratitude to Vitas Hospice Care. There will be a Celebration of Bob’s life at a later date. The family asks that in lieu of flowers, please donate to a charity that helps people in need.