To share your memory on the wall of Marian Fiasca, sign in using one of the following options:

Born in South Dakota on August 13, 1922, Marian was the firstborn child of Fred & Fran Mandery. She earned her teaching degree in SD, then yearning for additional challenges moved to Milwaukee where she returned to school for another degree and began her long employment with the US Government. She was a valued employee first for the Veteran’s Administration and later for the Social Security Administration.

Marian also lived in Baltimore, MD for many years and had been a longtime resident of Claremont, CA before returning to the Milwaukee area.

Marian was an accomplished musician, and her talents will be missed by all who were privileged to spend time in her company, including parishioners at Holy Assumption Church in West Allis where she played the organ for Sunday services for several years. She led many choirs over the years, including the Bell Choir at Library Square in West Allis. Additionally, Marian was active in many organizations including Daughters of the American Revolution – Annis Avery Hill Chapter, Colonial Dames of the XVII Century- Edward Jackson Chapter, Dames of the Court of Honor, Daughters of Colonial Wars, Daughters of American Colonists, Wisconsin Voyageurs Colony New England Women, and US Daughters of the War of 1812, P.E.O., and the American Guild of Organists.

Marian’s spirit of adventure and independence won the hearts of us all. Intelligent and witty, she was always on the go and never wanted to miss anything life had to offer. In her words, “Life is just so precious, Dearie…”

The family would like to extend a special thank you to Heritage Deer Creek and Horizon Home Hospice for the compassionate care they gave to Marian.

A Celebration of Life will be held on Saturday November 16th from 1-3:30 PM at the Kneeland Walker House - 7406 Hillcrest Drive in Wauwatosa. Interment will be at St. Dunstan’s in San Diego, CA.

If desired, a donation to The Wisconsin Conservatory of Music, Happy Endings No Kill Cat Shelter, or the charity of your choice can be made in memory of Marian.

“No love, no friendship can cross the path of our destiny without leaving some mark on it forever.”
Read Less

We encourage you to share your most beloved memories of Marian here, so that the family and other loved ones can always see it. You can upload cherished photographs, or share your favorite stories, and can even comment on those shared by others.

Posted Oct 20, 2019 at 07:57pm
The Milwaukee Chapter of the American Guild of Organists extends its sympathy to your family. Marian's many years of music, energy and wit were a great gift to those whom she served. Thank you for sharing this great woman with us. Sheri Masiakowski -- Dean, Milwaukee AGO.
Comment Share
Share via:
L

Posted Oct 16, 2019 at 07:58am
I read about the death of your love one. I'm sorry for your loss. Death is something that we cannot sever, but love and memories last forever. May the God of "tender mercies and all comfort continue to surround you at this difficult time. 2 Corinthians 1:3,4. God wants to give you peace that surpasses all thought. Philippians 4:6.
Comment Share
Share via: 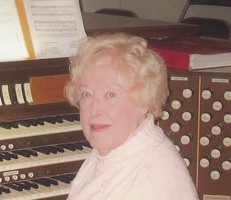