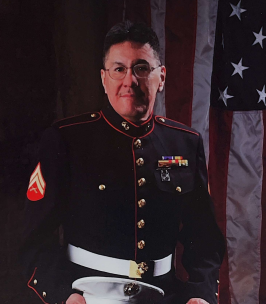 He served in Vietnam with the Marine Corps from 1966-67 and was a Purple Heart Recipient. He worked at GE for over 30 years where he met his loving wife Carolyn and built a beautiful family with their two daughters; Teri (Pete) and Jen (Jon), and five grandchildren; Samantha, Erica, Brandon, Jonathan and Julia.

He loved to travel the U.S. with Carolyn and his family, taking numerous trips out west with Teri and Jen while they were young and then taking the grandkids as often as possible. He enjoyed golfing with family and friends, loved going dancing with his wife, served with the Southeastern Oneida Tribal Honor Guard, was a member of the Oneida VFW, served as Sergeant at Arms for the Wisconsin Vietnam Veterans Chapter 1, and spent as much time with his family and friends as possible.

Leon is survived by his devoted wife, daughters and grandchildren and also by his brothers Mike (Colleen), John (Linda), Rick (Elaine), and David (Karen) House.

He is preceded in death by his parents, brothers Tom and Kevin House and his sister Norma Topping.

In lieu of flowers please send donations to the VA hospital. ﻿https://www.cdceportal.va.gov/