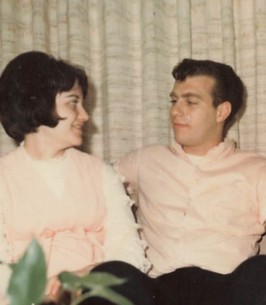 He graduated from Savannah High School in 1961, he was active with Football, among other sports. He attended Northern Illinois University. John met his beloved wife, Dianne Bogue, in kindergarten in 1948. Dianne and John were married in August 1964 and remained together for the next 53 years, when Dianne passed. John lived in Savannah until October 1966, when he moved to Milwaukee, WI with Dianne and their two children at the time.

As a young boy, he adored his pets and continued to have loving relationships with animals throughout his life. In fact, his cats, Midnight and Leo (who he adopted from the Humane Society) were his best companions in his most recent years.

John truly put everyone close to him in front of him, he never turned his back and would do anything for those he loved. John was the consummate father. In this twenties, he worked three jobs simultaneously, to support his family and save enough money to purchase their first home, which he still owns and resided at until his passing.

He taught the value of hard work, accountability and sacrifice and did not let things get in the way. For example, he was injured at one of his jobs at age 26, resulting in permanent loss of sight in his right eye. But the way he lived his life, you would not have known he could only see through one eye.

He coached his kids’ sports teams, filled leadership roles in scouts, even stepped in to umpire softball games. In his free time, he took his kids (and many other kids) sledding, ice skating, and played catch with them. Even his children’s close friends became close friends with John.

As a leader of men, he always put his team first, living by the golden rule. He fought for higher pay, better benefits and improved working conditions for his employees. His career was built in the railroad industry. The Milwaukee Road brought him from Savannah to Milwaukee in 1967. He spent 20+ years working at the Milwaukee Road. When they were acquired in 1985, he opted out of a transfer so his youngest son could complete his high school journey at the school where it began.

John took on a new challenge by getting his real estate and insurance licenses and found a way to support his family, pay for his kid’s college, while learning two new industries. In 1987, he joined the Wisconsin Central where he worked his way to become the General Superintendent Car Department. John found a role for his eldest son in the mechanical department. At age 59, John retired, but in 2004, he formed a private company of his own, Railway Specialists, Inc. where he and his eldest son continued to provide their expertise to other railroaders.

In short, anyone who had the pleasure of knowing John, know that He Did It His Way, for sure. He will be remembered by many as a truly unique, compassionate, and loyal man.

If interested, donations can be made in his honor to your favorite animal organization… such as ASPC, Humane Society or Happy Endings (his cats may find a home there).

John was preceded in death by his parents, Madeline and John Morgano, his brothers, Pete and Charlie.

There is a funeral service, including visitation scheduled at Hartson’s funeral home at 11111 W. Janesville Rd, Hales Corners, WI on Tuesday, August 16th, with visitation at 4pm followed by a service at 6pm.