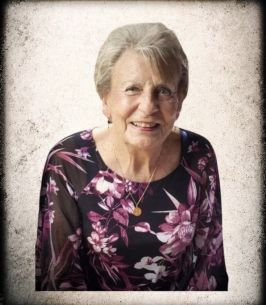 Hales Corners - (Nee Jirik) formerly Helm, passed away peacefully on June 15, 2022, surrounded by family. Joan was born in Antigo, Wisconsin, on May 13, 1941, to Wenzel and Harriet Jirik. Her family moved to Milwaukee in 1942 and then to Muskego in 1951. In 1958 Joan married Bob Helm, but sadly, she was widowed at the age of 34. Joan maintained strong ties with the Helm family until the time of her death.

To provide for her three children, Joan earned a nursing degree in 1977. She worked primarily in psych nursing and in drug and detox units. In 1979 Joan married Ron Hilbert; they divorced twenty years later.

Although a car accident in 2001 ended Joan’s nursing career, she worked as a home companion until the age of 75. When she was 73 Joan was Home Instead’s Employee of the Year. Joan greeted every stranger like a future friend and when she made friends, she kept them for life. Joan touched a lot of people in this world, and it’s a better world because of her. If it was taking a neighbor for a three-mile ride to Dairy Queen on a golf cart, or helping a friend with her bucket list by arranging a Harley motorcycle ride, Joan had a way of making people feel good. She was always caring and encouraging.

Joan enjoyed the simple pleasures in life, but also had an adventurous spirit. Some of her escapades included sky diving, parasailing, hot air ballooning, and bungee jumping. Even at the age of 75 Joan went swimming with dolphins and zip lining in Mexico. In Joan’s later years her kids gifted her with experiences rather than things, including trips to Las Vegas, Door County, Scottsdale and Green Valley, AZ and Cape Coral, FL.

Joan had the best backyard parties that always ended with colorful bonfires and good conversation. In fall of 2020 Joan moved from her long-time home on Lynn Drive in Muskego to Forest Ridge Senior Community in Hales Corners. There she made more new friends playing cribbage, poker and joining the daily afternoon gatherings in the lounge. Residents loved Joan’s spirit and she was famous for her homemade cashew brittle. Recently a resident told us that her friends at Forest Ridge were envious of how active Joan was with friends and family outside of the senior community. Joan enjoyed weekly Tuesday and Thursday luncheons with friends at various area restaurants and Friday night fish fry with family. One of Joan’s greatest pleasures was watching her kids, grandkids and then great grandkids participate in sports and other activities.

In April 2022, Joan was diagnosed with lung cancer. She also needed a heart valve replacement. Joan’s plan was to complete cancer treatment, get her valve replaced and jump out of a plane again.

We will always remember Joan, who despite the ups and downs in her life, was a woman who, even if she were sad, would leave you with a heartwarming smile and an awesome hug. . . . . . We don’t think Joan went directly to Heaven, we believe that she flew above Heaven and parachuted in.

The family would like to thank the staff at Froedtert Center for Advanced Care as well as the staff at Accent Care Hospice at Lutheran Home for their loving care of Joan and kindness to Joan’s family.