To share your memory on the wall of Janet Rubritius, sign in using one of the following options:

After many years as a PBX Operator, Janet retired from Mt. Siani Medical Center. She raised three children and was faithful to God, her family and church. She taught Sunday School in her early years, and enjoyed preparing many funeral dinners and celebratory meals. She also served in the church library in a leadership role and was an active member of Keenagers at Faith Bible Church. Janet was steadfast in her principles and values and rarely waivered.

Her funeral will be held September 25, 2020 at 12:00 noon at Faith Bible Church. Pastor Terry Angles officiating. Visitation will be from 10:30 a.m. to 12:00 noon. Burial will be at Highland Memorial Park Cemetery.

Face masks and social distancing will be required.

Receive notifications about information and event scheduling for Janet

We encourage you to share your most beloved memories of Janet here, so that the family and other loved ones can always see it. You can upload cherished photographs, or share your favorite stories, and can even comment on those shared by others. 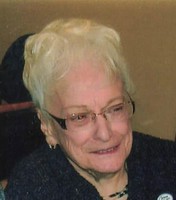