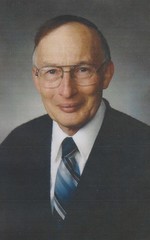 Harry Heileman, 79, died peacefully on August 10. He is preceded in death by his wife, Dr. Jean Johnson, and by his parents, Herbert and Mildred Heileman.

Harry grew-up in Hales Corners, attended Greendale High School and earned a Bachelor’s degree and later a Master of Arts degree in History from the University of Wisconsin – Milwaukee.

He served in the First Infantry Division in Vietnam as commander of an Armored Cavalry Unit, and then returned home to operate Heileman Marine with his father.

After marrying Jean Johnson in 1985, Harry moved to Ripon, Wisconsin, and together they enjoyed camping, white water canoeing and many travels.

Harry was passionate about history, respectful of the men and women who served their community and country. He authored a history of the Hales Corners Fire Department, When Fire Engines Were Red, and co-authored A Portrait of Ripon. He was a model railroader extraordinaire, masterfully building artistic and intricate train layouts that filled his Ripon basement . He was also an enthusiastic collector of model fire engines.

In 2010 Harry suffered a devastating stroke, which limited fully pursuing his many interests from that point on; yet, despite his many challenges, he remained ever the gentleman - sincere, principled and kind.

He is survived by Jean Johnson’s son and daughter, Dan (Sharon) House and Laurie (Collin) House and grandchildren Lauren, Brian and Liam, as well as sisters Jean (Jim) Sweeney and Sue (Chuck) Lord and their children Mike, Joel, Karen, Ellen and Rebecca.