To share your memory on the wall of Gordon Hagenkord, sign in using one of the following options:

Gordon “Gordie” Hagenkord, age 77, was born into Eternal Life on April 30th, 2021 at 11:26pm. He was preceded in death by his parents, Erwin ... Read More
Gordon Allen Hagenkord

“Gordie” was born on January 3rd 1944 in the town of Hales Corners, Wisconsin. He started his career in doors with AAA Overhead door. He then continued in doors his whole career. In 1980 he opened up his own business, Top Line Door, for about 5 years. He then opened up Able Door. He worked for Jacoby Overhead Door. Then he opened up another business, Bayview Door & Remodeling, where he worked until present. His son Todd worked with him for 5 years together in this business.

Gordie loved to sail and owned a few boats in his time. He loved spending time with his family and friends. His favorite car was 1963 TR3 Triumph. He owned two in his life.

Gordon was always the person to make you feel welcome in a room and treat you like he knew you for years even if you just met. He was the man who would give you the shirt off his back and try to help anyone who needed it.

Gordon was also a tissue donor, continuing to help people after his death.

Receive notifications about information and event scheduling for Gordon

We encourage you to share your most beloved memories of Gordon here, so that the family and other loved ones can always see it. You can upload cherished photographs, or share your favorite stories, and can even comment on those shared by others.

Posted May 11, 2021 at 01:37pm
I’m so great full to have joined the family being the Boyfriend of his daughter Amber.. I considered Gordy as a father since my father passed away a few years ago & Gordy treated me as one of his own. I’ll always remember the rode trip Me, Gordy, Amber & her son Jacob took out west last summer, we had a blast & seen many beautiful things, One being the Grand Canyon.. He’ll be missed dearly & all my condolences are with the Family..
Comment Share
Share via:
AU

Posted May 11, 2021 at 01:08pm
Our condolences, Todd. We were glad to meet your dad, not only when he came and lent his skills to us, also when we were out and about one afternoon, and he was so happy to chat for a while and enjoy the camaraderie. You and yours are in our heartfelt prayers, your dad was one of a kind in so many great ways.
Peace, Ann & Bill
Comment Share
Share via:
HS

Flowers were purchased for the family of Gordon Hagenkord. Send Flowers 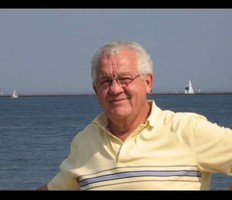