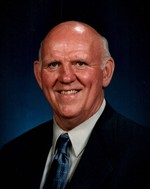 Gerald H. Boldt, age 83, went home to be with his Lord and Savior on May 1, 2021 after a courageous battle with Alzheimer’s.

Those who desire, memorials to Christ Lutheran Church would be appreciated. A special thank you to the memory care staff at Renaissance Senior Living, New Berlin, for the compassionate care given to Jerry.

Gerald Henry Boldt was born to Harold and Dorothy on August 16, 1937, in Muskego, Wisconsin. He was the oldest of four children. God kept his promise and adopted him into his family by means of the Sacrament of Holy Baptism on September 19, 1937 and Jerry later confirmed his faith on March 18, 1951 at St. Paul’s Lutheran Church, Muskego.

Jerry was a 1955 graduate of Rochester Agricultural School in Rochester, WI. He loved the game of baseball and was a standout athlete. On June 6, 1959, the Lord led his life and that of Joan (nee Gillette) to be joined in marriage at St. Paul’s. He began an apprenticeship in HVAC and worked with several companies before starting his own heating & cooling business in 1976 with Joan. His sons and daughter-in-law would eventually join them at Boldt Contractors Inc. Jerry continued working daily at the office until his retirement in 2012.

Jerry was a member of Christ Lutheran Church, Big Bend, for more than 50 years. During that time he diligently served on multiple building committees and various church leadership positions. For over 20 years, he served on the WELS SE Wisconsin District Mission Board. He and Joan were involved with the Milwaukee Inner City Mission Committee supporting inner city congregations and their members. They also taught English as a second language and bible lessons at the Chinese Mission in Elm Grove for several years. Jerry also volunteered his time to the Muskego Fire Department and the Wisconsin Air National Guard.

Jerry enjoyed his church, traveling, bowling, cards with cousins, Brewers games, chatting with anyone, working in his yard and business, giving pontoon rides on Potter’s Lake and loved ALL sweets. He treasured the time shared with his eight granddaughters with “bear traps”, family history lessons, jokes and many laughs. Jerry will be remembered for his big smile, stories, hard work, and for being an honest businessman and devoted Christian husband, father, brother, grandfather and friend.

“Be faithful, even to the point of death, and I will give you the crown of life"