To share your memory on the wall of Elizabeth Nolan, sign in using one of the following options:

Dedicated historian, Libbie Nolan has completed her journey home to God as her epic poem would indicate. She joined her heavenly Yankee ancestors and later departed ones on October 20, 2019 at the age of 102 years and 9 months.
Born on her ancestral Yankee hamlet Prospect Hill in New Berlin, Waukesha County, she was the eldest daughter of Lee Elden and Eva May Russell Faulkner. Growing up through America’s Great Depression, devastating drought and World War II at the family’s Bonniedale farm in Vernon Town, her long life took many turns locally, community and state-wide as an artist, author, editor, poet and historian.
A Mukwonago High School honor student who sang with her ukulele, Libbie moved into the Rural Arts Program at UW Madison followed by membership in the University’s statewide Regional Writers Program. A life member of both organizations, she served on both state boards of these organizations at the same time. Libbie attended the Milwaukee Art Institute, Layton School of Art and the prestigious Cranbrook Art Academy in Michigan focusing on sculpture and ceramics. She has created many historical oil paintings. Libbie later taught ceramics classes.
World War II found patriotic Libbie working in the Allis Chalmers Navy War plant winding motors for ships’ controls. She offered a small painting for families donating two pints of blood for the war effort. Painting 23 pictures helped to collect 56 pints of blood.
At the war plant, she met her future husband, Indiana born Irish engineer Frank Nolan. They would settle at Prospect Hill in June of 1945 where their four children would progress in the community and university systems.
In the work-a-day world, Libbie Nolan was a Waukesha Freeman reporter and editor. She wrote the history/nature column “Around the County with Libbie Nolan”. She retired as the News Editor of the Muskego Sun newspaper.
Libbie is descended from her Revolutionary War ancestor Gideon King. She has been a member of the Daughters of the American Revolution for over 20 years. A member of the Waukesha Continental Chapter; Libbie served as historian.
Libbie was a long time member of the Vernon United Presbyterian Church which her great-grandfather Thomas Faulkner helped to organize. There her family attended and she edited the Vernon Ventures church publication, sang in the choir and served as a Summer Bible School teacher.
Preserving Waukesha County’s rich history was her passion. During America’s 1976 Bicentennial, Libbie helped to organize four historical societies: New Berlin, Muskego, Big Bend-Vernon and the Wind Lake Historical Society in Racine County to be sure our local history would not be lost. Libbie conducted a historic sites survey of the entire county and for the Waukesha Historical Society; she edited the Landmark Magazine for 35 years. Libbie was a charter member and life member of those historical societies and life member of the county society. The Waukesha Historical Society created the Libbie Nolan Faulkner Award that is presented to promising historians each year.
In Libbie’s hometown of New Berlin, she was named to the first Library Board, first Landmark’s Commission and was longtime curator of the New Berlin Historical Society when the historical park on top of Prospect Hill was being formed.
As a Hill and Dale 4-H leader, she focused on chair caning, conservation, pigeon raising and cooking. Libbie also authored four historical books including a history book for Waukesha County school children titled Land of the Little Fox that she also illustrated. She also co-chaired the “Digging Up Your Ancestors Contest” for those children.
Twice named Citizen of the Year for New Berlin, Libbie Nolan dedicated her life to enriching the lives of others.
Preceding her in death were her husband, Frank Michael Nolan, her sisters: Margaret Emily Adeline Faulkner Meyer and her husband Lewis, Virginia Belle Faulkner Larsen and her husband Robert, three grandchildren; Linda, Frank and Scott Nolan and nephews Lewis Meyer Jr. and Kevin Larsen.
Surviving are children: Denny Nolan and his wife Diana, Dr. Tim Nolan, Sandra Nolan, Betsey Nolan Bystol and her husband Ron, Pat Nolan and his wife Janet.
Grandchildren: Bob ( Sue) Nolan, Julie (Stephen Jr.) Nolan Varricchio, Jennifer Nolan, Michael Nolan, Tracy Nolan, Stephanie (Dan) Nolan Pelzek, Alissa (Michael) Nolan Boyle, Dan Nolan, Lori (Bret) Nolan Kelso and Pam (Jeremy) Nolan Volden.
Great Grandchildren: Dr. Carrie (Ben) Singerman, Dr. Jamie (Jason) Nolan Scott, Scott Nolan, Tyler and Caleb Pelzek, Brody and Ellie Boyle, Meriem Nechchat, Stephen Varricchio III, Henry and Finlay Volden.
Great Great grandchildren: Gideon and Ari Singerman.

Because of Libbie's love of our country and her patriotic spirit we suggest memorial donations to:
-Gary Sinise Foundation, donor@garysinisefoundation.org
or
-Fisher House Foundation, donations@fisherhouse.org
Read Less

To send flowers to the family or plant a tree in memory of Elizabeth H. Nolan (Faulkner), please visit our Heartfelt Sympathies Store.

Receive notifications about information and event scheduling for Elizabeth

We encourage you to share your most beloved memories of Elizabeth here, so that the family and other loved ones can always see it. You can upload cherished photographs, or share your favorite stories, and can even comment on those shared by others.

Posted Oct 25, 2019 at 09:30am
With heartfelt condolences from your Ohio Head Start family. Much love.

Posted Oct 24, 2019 at 09:04am
Wishing you peace to bring comfort, courage to face the days ahead and loving memories to forever hold in your hearts.

Posted Oct 23, 2019 at 09:45am
Please accept our most heartfelt sympathies for your loss... Our thoughts are with you and your family during this difficult time.

Flowers were purchased for the family of Elizabeth Nolan. Send Flowers

Posted Oct 22, 2019 at 06:33am
May you continually be comforted by thoughts of happier times of precious memories. May God "surround and comfort" you at this sad time. Psalm 71:21.
Comment Share
Share via: 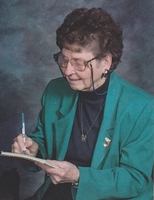