To share your memory on the wall of Dolores Lazenby, sign in using one of the following options:

Dolores Lazenby came into this world on May 8, 1923 to Edward and Marie Kasal. She was born in a house next to the Milwaukee River, only a block away from where she would grow up, and, later with my dad, build a house next door and raise a family of her own. Dolores had 1 sister, Noreen, who we all lovingly called “Nonny”. The 2 sisters were very close and best friends all their lives, even though Mom was 10 years older. When each married, Mom and Dad and Nonny and her husband Clete, they were all best of friends, and both families got together often.

In 1941, at the start of World War Il, Dolores decided to serve her country in the military. She was very patriotic. In fact, I remember seeing her cry more than once when the Star-Spangled Banner was played. So, not surprising, she joined the Navy as a WAVE when she was 19 years old. She trained at Hunter College in New York and the Great Lakes Naval Base in Illinois. She served in the Medical Corps as a Pharmacist Mate and was stationed at the naval base in Jacksonville, Fl, where she would meet my Dad. Dolores worked in the naval hospital infirmary there, and as an Aviation Medicine Technician, training fighter pilots and their crew in dealing with oxygen deprivation at high altitudes. She and my Dad, also an Aviation Medicine Tech, would qualify to work in the aerospace program after the war but they chose a different path. My mom being a devoted daughter, wanted to come back to Milwaukee and help my grandparents with their fishing ' Bait and Tackle' shop. At this time, it was a booming business, especially with perch fishing in Lake Michigan.

Later, she worked as a personal secretary to an investment broker and then as office manager at the Visiting Nurse Association. Mom enjoyed working outside our home, and could supplement my dad's job as a Milwaukee police officer. She wanted to make sure my brother and I had the opportunity to go to college.

Mom was a loving mother but she could be strict with us, especially if she thought we could get hurt. One time, Dale and I went for a walk with a family friend along the river shore, which was down the hill from our house. I yelled to my grandpa where we were going but he didn’t hear, unfortunately for me. Mom called and looked for us, but, of course, we were nowhere to be found. She was convinced we fell off the dock into 6 ft. of water and WAS UPSET! Finally, she saw us coming back and, thinking we went off on our own, got the spanking stick. When I saw her face, I knew we were in trouble, so I decided to step up and get my spanking first instead of waiting for it. Dale was fine with that. By the time it was his turn, my dad was there and explained what happened, so my brother got off scot-free. I could have kicked myself! Afterwards, Mom told us how much she loved us and was terrified thinking we were gone forever, and that spanking us hurt her more than it hurt us. Even in my child's mind, I understood. To Mom, her family was everything and there was nothing she wouldn't do for them. She was a devoted daughter, sister, wife, mother, and doting grandma and great-grandma.

Mom had a good sense of humor and a contagious laugh. She was very sentimental and quick to cry if something touched her heart. My grandma often said her tear ducts were too close to her bladder!

I found her Navy diary a few days ago and read an entry about her feelings for my dad. This is a quote from that diary: "Earl said he loved me but wouldn't go out with me anymore 'cause he knew I didn't love him.... at least he thought so. He won't go to med school if he knows I care for him. Sacrifice??? What shall I do?... ls it right for me to tell him I care or let him think I don't, so he'll go on to school?"

That was my mother!! Well, we know how that turned out, and, as far as I'm concerned, she made the right decision.

Mom spent many years in a wheelchair and suffered from Parkinson's Disease but seldom complained. I think the hardest thing for her was losing her independence and not feeling useful.

I have a lot of good memories of Mom and am sure all of you do, too. l take comfort in knowing she's with Dad, Dale and Nonny, in a place she has wanted to be for a while now. Love you Mom.
Read Less

Receive notifications about information and event scheduling for Dolores

There are no events scheduled. You can still show your support by sending flowers directly to the family, or planting a memorial tree in memory of Dolores Jane Lazenby (Kasal).
Plant a Tree

We encourage you to share your most beloved memories of Dolores here, so that the family and other loved ones can always see it. You can upload cherished photographs, or share your favorite stories, and can even comment on those shared by others.

Posted Jun 07, 2020 at 02:56pm
I was very saddened to hear of Dolores's passing. It was my privilege to work with her at the VNA.
We were co-workers for several years. She was kind, a good listener and a role model as so many of
"the greatest generation" were.

My deepest sympathy to her family. 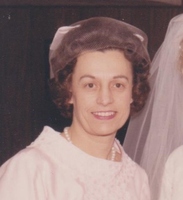