To share your memory on the wall of Dewey Gay, sign in using one of the following options:

Dewey was proceeded in death by his parents, Clifford and Irene Gay, Siblings Phyllis, Willamae, Richard and daughter-in-law Terri Gray.

Receive notifications about information and event scheduling for Dewey

We encourage you to share your most beloved memories of Dewey here, so that the family and other loved ones can always see it. You can upload cherished photographs, or share your favorite stories, and can even comment on those shared by others.

Posted Mar 11, 2021 at 04:46pm
Who could forget Dewey? His laugh and voice were one of a kind! He was a strong man physically and spiritually. I'll never forget times my sisters, Leann and Vicki, and I would spend at the family home in Franklin. It always was a fun time with lots of laughs.
Even though we haven't seen him often in the last years, he is one of those people I will always treasure having known. Condolences to the family. Rick Ruechel and family.
Comment Share
Share via: 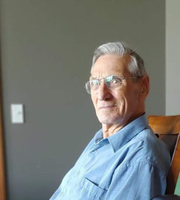