To share your memory on the wall of Delburn Pellett, sign in using one of the following options:

Del delighted in the memories and storytelling shared in his last days and his family could not be more grateful for the time he was able to spend with loved ones. Thank you to those who spent time caring for him at his bedside including his family, special niece Tina Browne, and nephew Ronnie (Sue) Pellett. Special thanks to every single person on staff at Clement J. Zablocki VA Medical Center who shared in his care.

Del was born March 3rd of 1930 in Viola, Wisconsin to Boyd and Mona Pellett. Raised working on the farm alongside his parents and siblings is where he learned his resiliency and compassion. His hardworking nature was instilled with his rising early each morning to complete his chores, which included loading up the horse and wagon to deliver the cow’s milk to the cheese factory on his way to school. As the only student in his grade Del attended Lower Camp Creek, a one-room schoolhouse where he received his primary education. On his way home from school with his younger siblings in tow he would stop back at the factory to retrieve the milk cans to take back home to start the process over again the next day. This routine continued throughout his childhood until he started running cross country in high school when he would occasionally run the 2.5 miles to school.

At the age of 18, after graduating from Viola High School, Del and his buddy drove across country helping fellow farmers work their farms. When they could no longer find work, they decided to enlist in the Marine Corps. In 1949 Del was accepted for service into the United States Marine Corps where he completed basic training at Parris Island in South Carolina. After basic training Del volunteered to be trained as an amphibious truck driver and was transferred to Camp Delmar in California. After receiving his training Del drove his duck from Camp Delmar to San Diego where he was deployed to Korea. He served in the Korean war for 1 ½ years before returning to the states. During his time in Korea he drove the ducks unloading the ships and delivering supplies to the war zones with the aid of his trusted interpreter friend at his side. While serving in the Marines Del received honors as an expert rifleman. After returning home from Korea Del continued his service driving the ambulance on the military base. Receiving an honorable discharge in 1953, Del returned to Wisconsin where he worked alongside his brother Mike before going into the trucking industry.

On June 8th of 1956 Del met Gloria Holm and proposed 10 days later. Then on July 14th of 1956 they were engaged and married on December 1st that same year. In January of 1959 is when Del’s firstborn daughter Sandy arrived followed by Mark in September 1960, Bonnie in August of 1962, and Renee of October of 1964. Becoming a grandpa in 1979, Del’s brood continued to grow to the tune of 18 grandchildren and counting. Working as a truck driver for 55 years, Del made many friends and pals along the way. Hands down Del would say that his favorite truck was a Mack. He had many talents and hobbies including bowling, playing baseball, tinkering with and fixing odds and ends. His favorite toy was his 14-horse John Deere tractor and in his spare time he enjoyed watching John Wayne western movies (no matter how many times he had already seen them), attending horse and colt shows, horse and tractor pulls, and his annual 4th of July parades.

Without trying Del was always a confidante and pal. He will be truly missed and will be treasured forever.

Visitation will be held Thursday March 5th at Hartson Funeral Home,11111 W Janesville Rd Hales Corners, 53130, from 5-8pm. Del will be laid to rest with a private final salute with military honors at Southern Wisconsin Veterans Memorial Cemetery on March 6th at noon.

Memorials made to the Clement J. Zablocki VA Hospital of Milwaukee, WI are appreciated.
Read Less

We encourage you to share your most beloved memories of Delburn here, so that the family and other loved ones can always see it. You can upload cherished photographs, or share your favorite stories, and can even comment on those shared by others.

Evergreen Pharmacy purchased flowers for the family of Delburn Pellett.

Flowers were purchased for the family of Delburn Pellett.

Posted Mar 04, 2020 at 06:16am
I remember going to a Brewer game with Del, Merlin my dad, Rick my brother and Berney my son! Berney had to pee in the 5th inning while the Brewers were at bat. By the time I got back to our seats the one run by either team had gone out of the park. We all had a laugh.
Comment Share
Share via: 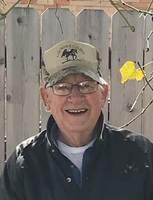