To share your memory on the wall of David Holzhauer, sign in using one of the following options:

Provide comfort for the family of David Holzhauer with a meaningful gesture of sympathy.

Dave served proudly in the U.S. Army and was stationed in Germany in the early 1950s. During his service he drove tanks and used his artistic talents to paint lettering on officer vehicles.

Since the mid 1970s, David was active in North Shore Congregational Church, where he served on various boards and was one of the head ushers. He also enjoyed volunteering as a donation driver for the food pantry at Faith Lutheran Church in Milwaukee.

A decorated swimmer, Dave competed in numerous Badger State Games and Senior Olympics events. He was an active member of the YMCA, where he swam daily for many years. He stayed in contact with his Riverside High School swim team by organizing reunions.

Dave was a talented artist who enjoyed making charcoal drawings. He was recognized for portraits that he made of famous politicians including Dwight Eisenhower and Winston Churchill. He put his artistic talents to use by starting his own sign-painting business, which grew into Holzhauer Sign, then Holzhauer Graphics, after Hayes, Ryan, Barb and nephews Andy, Colin and Todd joined to expand the family business. Dave enjoyed being a part of the expansion and took pride in the graphics produced for numerous local and national businesses, especially his beloved Milwaukee Brewers and Milwaukee Bucks.

Many thanks to the wonderful caregivers at New Perspective North Shore and for the staff of Seasons Hospice.

A celebration of life will be held at 1 p.m on Saturday Nov. 30, 2019 at North Shore Congregational Church, 7330 N Santa Monica Blvd. Following the service there will be a reception in Friendship Lounge. From 3-5 p.m. there is a gathering in the Summit Room (4th floor) of New Perspective North Shore, 8775 N. 60th St., Brown Deer.

We encourage you to share your most beloved memories of David here, so that the family and other loved ones can always see it. You can upload cherished photographs, or share your favorite stories, and can even comment on those shared by others.

I was so sorry to hear about Dave He was always one of my favorite people to visit with at coffee hour, always with a smile. He is greatly missed at NSCC. My sincerest sympathy to you and your family.

Posted Nov 26, 2019 at 03:32pm
I am so sorry to hear of your loss. Dave was such a great guy. Years ago when he was the acquatic director at the North Shore YMCA he was so patient with our kids who did more splashing than swimming!
My thoughts & prayers are with you, Barb, & your family. I understand your loss.
Love, Cheryl Sapinski
Comment Share
Share via:
HS

Flowers were purchased for the family of David Holzhauer. Send Flowers

Posted Nov 24, 2019 at 03:12pm
Dear Barb, Hayes, Ryan ,and Adam, We are thinking about you during this difficult time. Our deepest condolences. Very respectfully,the Greene family.

Flowers were purchased and a memorial tree planted for the family of David Holzhauer. Send Flowers 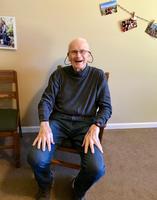