To share your memory on the wall of Dan Habighorst, sign in using one of the following options:

Dan graduated from Bonduel High School and University of Wisconsin-Madison and held human resources positions in several companies across the country before serving more than 30 years at Patrick Cudahy, retiring as their Vice President, Human Resources in 2017. After losing his wife, Dodie, in 2016, Dan found love again and married Barbara Ennis in 2019.

He was a hard worker all of his life. Growing up on a farm he learned responsibility early and kept those ethics all through life. He was active in high school football as a quarterback and was an excellent baseball pitcher in the local Dairyland league. Pitching for Landstad, he pitched a no-hitter to win a Championship against Bonduel. Occasionally his dad was the home plate umpire and a difference of opinion would arise, but Fred always won the argument, much to Dan’s dismay. Hunting and fishing with his dad and brothers rounded out his interests in his youth.

As an adult, he was a man of great faith who treasured his family and enjoyed exercising, reading, golf, and rooting for Wisconsin sports teams.

A visitation will be held on Sunday June 27th at Hartson Funeral Home, 11111 W Janesville Rd Hales Corners, 53130, from 12pm to 2pm followed by memorial service at 2pm. In lieu of flowers, contributions in his memory can be made to American Heart Association.

Receive notifications about information and event scheduling for Dan

We encourage you to share your most beloved memories of Dan here, so that the family and other loved ones can always see it. You can upload cherished photographs, or share your favorite stories, and can even comment on those shared by others. 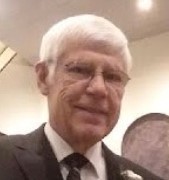