To share your memory on the wall of Brian Bolin, sign in using one of the following options:

Provide comfort for the family of Brian Bolin with a meaningful gesture of sympathy.

Brian is survived by his wife of 30 years, Janet, his daughters Rebekah of Los Angeles, Brooke of Colorado Springs, and Allison currently living in Cedarburg. He is also survived by his parents Arnie and Marilyn Bolin of Northpoint IL, his brother Brad of Minneapolis, MN , sister Gayle of Chicago, IL, and sister-in-law Mary Jo Menzies of Oshkosh, WI. Nieces: Lana Bolin, Ashley (Bolin) VanHuis, Stephanie Bolin and Leah Bolin. Nephews: Marshall Bolin, Jon Frejlich, Scott Frejlich, and Max Freilich. Brian is also survived by his devoted Mother-in-Law Mary Whitmore of Cedarburg, Wisconsin. He was preceded in death by his beloved brother Bruce and lovely niece, Natalie.

Brian was born in the Upper Peninsula of Michigan and lived in Harbert, MI from the ages of 4-9 years. He lived in Minneapolis, MN from the ages of 10-17 years (fostering a love for the Vikings!) and moved to Benton Harbor, MI at the age of 17. In his high school years, both Brian and his brother Bruce enjoyed a fairly illustrious hockey "career", not unlike the Hanson brothers from the iconic hockey movie Slapstick. They also were fierce competitors on the tennis court.

Brian attended Michigan State University for one year and became a lifelong Sparty fan. Opting for the working life as opposed to campus life, he began working in a dialysis center in Benton Harbor. Brian quickly developed a reputation for being "the best stick", with patients specifically requesting that he be the technician to hook them up to their dialysis machines. Building on that reputation, he began work as a private duty dialysis technician. He was hired by a devoted patient to accompany him with his travels across the country while Brian took care of him. Winters in West Palm Beach were included in this private duty stint and it was during these Florida "working vacations" that Brian honed his golf skills.

The next juncture of Brian's life developed when he and Janet's longstanding friendship developed into a love story. They met as teenagers and become pen pals over the years. After falling in love and getting married, the two decided that Brian would pursue his love of golf in a more professional role. He, Janet and Rebekah moved to Orlando, FL so Brian could attend the Golf Academy of the South. Here he received a Certificate of Golf Complex Operations and Management. Upon graduation, Brian landed a job that was known then as Ville du Park Country Club in Mequon, WI. The family of 3 moved to the "Mayberry" town of Cedarburg, WI.

While Brian enjoyed working with people in the Assistant Golf Professional role, he realized this work schedule would not be conducive to family life. He decided to leave the golf profession and return to his medical experience. It was at this time Brian began his lifelong career in a urology clinic associated with Columbia St. Mary's as a medical assistant. True to form, his reputation grew as being patient, kind, willing to listen, and able to provide comfort and ease to all he came in contact with.

Brian's dedication, devotion and love for his wife and daughters was the driving force of his life. Throughout the years, family vacations included beaches, wilderness camping, and several road trips through National Parks. He and Janet enjoyed trips to Europe with their daughter Rebekah, along with a special trip to Paris together. He was a fan of all sports, especially those that involved his daughters. He was their biggest fan, coach, and supporter as he cheered on hundreds of soccer, tennis, and basketball games. Off the courts and fields, he loved to spend quality time with his daughters attending Milwaukee Bucks and Brewers games. Brian was also a lover of good music, especially classic rock, blues and harmonica. One of his favorite pastimes was listening to music and attending concerts of his favorite artists.

Truly one of a kind, Brian will be missed by all who knew and loved him. In his honor, we ask that you appreciate the blessings in your life and the moments of the simple joy of family, friends, nature, sunsets and, of course, good tunes.

A celebration of Life will be held Saturday December 28th at the Mee-Kwon Golf Course Club House at 6333 W. Bonniwell Rd., Mequon, Wisconsin Starting at 12:00 noon. In lieu of temporary flowers and uncomfortable clothing, we ask that you dress casually, and take time each day to rejoice in health and happiness.
Read Less

We encourage you to share your most beloved memories of Brian here, so that the family and other loved ones can always see it. You can upload cherished photographs, or share your favorite stories, and can even comment on those shared by others.

Posted Dec 28, 2019 at 06:51pm
I was saddened to hear of Brian’s passing. I have fond memories of him. Heartfelt sympathies to the family. Tina VanderDoes Kirby
Comment Share
Share via:

Posted Dec 28, 2019 at 08:32am
Brian was always kind to fellow employees. I will always remember discussing Berggren artist with him. He was a great coworker. Many parents expressed that they really like him. Rest in peace.
Comment Share
Share via:

Many patients, not parents.
NL

Posted Dec 27, 2019 at 11:33am
I most remember Brian as my close friend in high school. We would play tennis together for hours, go to Lake Michigan, walk out the St Joseph pier at the beach to the end in terrible weather, running from one post to the next between big waves. Playing king of the raft on the lake at my house with Jeff Mark and I. Fires on the beach in the summer at dusk. We were kids just having fun together. Reading about his life after high school I see what a special person he continued to be. Those that have left us, are never truly gone if they remain in our memories nigel longland
Comment Share
Share via:
GS

Posted Dec 23, 2019 at 08:34pm
With our love and sympathy, the Carl Soderberg Family- Glenna, Karyl, Mark and Scott. We regret that we cannot be there. 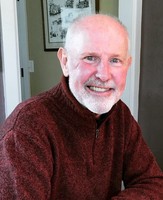