To share your memory on the wall of Arthur Piotrowski, sign in using one of the following options:

Born on October 5, 1920, Arthur grew up modestly (to say it kindly) on the southside of Milwaukee during the Great Depression. He was the son of Joseph Piotrowski, a local butcher, and Mary Jankowiak, an immigrant mother (she was born on a boat traveling from Poland to America – in search of a better life). Arthur laughed when he described his childhood that lacked the typical trappings, like a family pet or even a bike. “Nobody else had one either. That’s why they called it the depression!” he would say, with the wry smile that would light up a room every time he landed a quick-witted joke.

A few years after graduating high school from Milwaukee’s Boys Tech, Arthur enlisted into the U.S. Army in 1942 and joined the 9th Armored Division as a Radio Operator. When asked by his grandson seventy years later what a Radio Operator did, he replied, “I operated a radio.” Arthur’s tank division landed on Utah Beach shortly after D-Day, entering World War II in the middle of a firefight. His battalion is credited with repeatedly disrupting Nazi forces during the historic “Battle of the Bulge.” Outnumbered 5-to-1, the division repelled advancing German soldiers from reaching Luxembourg in late 1944. In the Spring of 1945, Arthur’s 9th Armored Division caught up to retreating Nazi soldiers, who were desperately attempting to detonate all bridges across the Rhine River and prevent Allied forces from marching to Berlin. They took heavy fire by ground and by air but were able to save the Ludendorf Bridge at Remagen, enabling divisions and heavy equipment to advance. Their bravery is credited with ending World War II in Europe and liberating concentration camps weeks, possibly months, ahead of schedule.

All along, Arthur was sending letters and silly photographs back home to his sweetheart, Margaret. A few years later when he returned stateside, Arthur and Margaret got married and had a daughter, Nancy. Arthur loved spending time rolling dice and playing games with family and friends at home, listening to Paul Harvey explain “the rest of the story” on WGN Radio, and fishing and playing golf with his friend, Frank (who helped Art sneak martini mix in milk jugs onto the course in his golf bag). Arthur also loved taking trips with Margaret (who Arthur lovingly referred to as Maggie, Mags, Mutz, Mutzy, and so on), especially on vacations to Las Vegas and Florida to escape Wisconsin’s harsh winters. They had so many good times together.

Shaped by his formative years, Arthur was comically careful about spending money. Margaret and he were coupon-cutters to the core – always buying the least expensive, off-brand instant mashed potatoes, orange juice, and windmill-shaped sugar cookies. His golf clubs and fishing gear were probably as old as he was. A careful analyzer of retail receipts, Arthur was known for returning to stores and fighting managers for the $0.37 that he believed that he was due. And usually, he was right. Arthur’s frugality was counter-balanced with his philanthropy. He believed deeply in giving back to his church, family, friends, and VFW hall. His belief in his veteran buddies led him to be elected First Commander of the VFW Esser Lademan Post 7344.

When his time in the Army came to an end, Arthur was hired at Cutler-Hammer (now called Eaton), where he worked for 43 years as a tool-and-die operator and supervisor – and as a proud member of Cutler Hammer’s bowling and baseball teams.

Late in life, Margaret was diagnosed with Alzheimer’s Disease. As the days went by and his wife slipped further and further into dementia, Arthur never left her side. Ever.

When Margaret passed, he committed his energy to writing letters to close family and friends. You never really knew what would be inside the envelopes he would send: newspaper clippings with stories he liked, hand-written jokes he stole from Reader’s Digest – but all of the time, they included a little bit of money, a nice note and his constant catchphrase: “Keep your nose clean.” In the estate planning paperwork he left for his loved ones, Arthur said he wanted to be remembered for, “Not what I left my children, but what I left in my children, grandchildren and great grand kids.” Mission accomplished, Art.

Arthur is survived by his daughter Nancy Rolland (nee Piotrowski) and her husband Steve; nephew Roger Piotrowski and his wife Barbara; grandson Shawn Rolland and his wife Elizabeth Heimerl-Rolland (nee Brandt); granddaughter Sara Pieper (nee Rolland) and her husband Dustin; Arthur’s five great grandchildren Miles, Brynn, Ethan, Sarah and Lucy; and many others who loved him.

A celebration of Arthur’s life will be held on Wednesday, March 4, 2020 (with visitation from 10 to 11 am and a ceremony from 11 am to noon) at St. Mary’s Catholic Church, 9520 W. Forest Home Ave., Hales Corners, with a lunch to follow. A final salute to Arthur with military honors will be held at 3 pm at the Southern Wisconsin Veterans Memorial Cemetery, 21731 Spring Street, Union Grove, WI.

Those who so desire may make memorial donations in memory of Arthur to St. Mary’s Catholic Church or to the VFW Hoeppner-Horn Bros Post 5716.
Read Less

To send flowers to the family or plant a tree in memory of Arthur A. Piotrowski, please visit our Heartfelt Sympathies Store.

Receive notifications about information and event scheduling for Arthur

We encourage you to share your most beloved memories of Arthur here, so that the family and other loved ones can always see it. You can upload cherished photographs, or share your favorite stories, and can even comment on those shared by others.

Posted Mar 03, 2020 at 08:38pm
I’m so sorry for your loss!! Your dad was an amazing man sweet man and a wonderful uncle!
Whenever we came back to Milwaukee Tim and I enjoyed seeing him! He and my dad were so cute together! I loved his sweet sense of humor and his wonderful jokes in his cards! We’re sending lots of hugs and much love to you and your family! I’m so sorry we can’t be there to celebrate his amazing life! We were lucky to be so blessed with these amazing parents!
Much love and hugs,
Lynn and Tim Sell
Comment Share
Share via:
SK

I’m so sorry for your loss!! Your dad was an amazing man sweet man and a wonderful uncle! Whenever we came back to Milwaukee Tim and I enjoyed seeing him! He and my dad were so cute together! I loved his sweet sense of humor and his wonderful jokes in his cards! We’re sending lots of hugs and much love to you and your family! I’m so sorry we can’t be there to celebrate his amazing life! We were lucky to be so blessed with these amazing parents! Much love and hugs, Lynn and Tim Sell 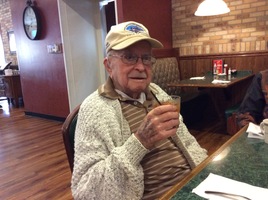